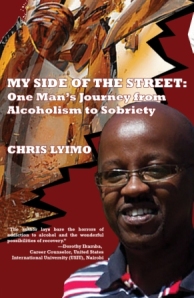 Title : My Side of the Street: One man’s journey from alcoholism to sobriety

This is probably more of a reflection and discussion than a review of Chris Lyimo’s very engaging narrative about his struggles with, and triumphs over alcohol addiction. The book raised too many questions in my mind for me to limit my reflections to just a review. Especially so, because one of my frustrations with the book was that it restricted Lyimo’s experience to the individual, yet its content presents an indictment of modern Kenyan society which, despite all the money it has, has been unable (or is it unwilling?) to answer fundamental questions of what it means to be an African human being in this second millennium of our Lord.

The first thing I read by Lyimo, and which made me want to read this book, was his blog at http://www.mysideofthestreet.wordpress.com. What stood out for me was a man who was deeply thoughtful and deliberate about life – whether about parenting, faith or politics. He does not take anything for granted. He questions, engages and argues, but he also follows with conviction, which is a very rare quality among most Kenyans. Most Kenyans play safe; whether it’s in careers, marriage, faith or culture. They take the well beaten street so that they don’t answer too many questions. They aspire for careers in medicine or accounting so that they don’t have to answer condescending questions such as “where will you get a job with that?” They marry within their tribe so that they have a relatively smooth ride during the negotiations, and as a backup plan in case the marriage doesn’t work and they have to go back home to “I told you marrying someone of that tribe wasn’t going to work.” When church pastors or elders say “jump,” many Kenyans will ask “how high?” because asking “why?” will attract criticism for questioning the Lord’s will. Many Kenyans will also follow customs and traditions without conviction, because that’s easier than having their Africanness questioned, and easier than being accused with “mwacha mila ni mtumwa.” By contrast, Lyimo is a different breed of Kenyan; he isn’t one of those who float with the crowd, and for that he paid a heavy price.

Let me explain what I mean. The book’s opening sentence, “your kanyamu doesn’t look like theirs,” which was how his elder sister distinguished him from his sisters, indicates a major question that confronts Lyimo as he approaches teenage: what does it mean to be a man? However, the question was never answered for him. Instead, that statement, and many other incidents in his life, reduced manhood to a single organ of a man’s anatomy (a phenomenon I have always complained about), and symbolized that he did not fit in, against which Lyimo would fight for many years afterwards. Manhood was once again trivialized when he was put through circumcision at the tender age of 10 (I refuse to believe that circumcising children is African – our grandfathers had already broken their voices by the time they faced the knife). He was taken through the physical ritual without so much as an explanation as to what that meant, I guess because it was taken for granted that African culture is self-explanatory, which it isn’t. Nothing in the world is. And so his life continued as one constant bumping into – rather than going through – the milestones of life, like falling in love and his heart being broken, going to high school, sitting exams, grief over the loss of his twin sister and later on of his baby son. At each stage, there was no guidance, no support, no consolation, no commemoration from the people around him. In fact, he finally mourned his departed family members when he was recovering. So while in normal lives each milestone is (or should be) marked by rituals, celebration or mourning, Lyimo soaked his life’s milestones in alcohol.

And the people in his close circles were complacent. The first time he got drunk was on New Year’s eve night, at the age of eleven, with alcohol provided at home. When his twin sister died in a road accident, everyone “understood” why he “needed to drink.” The best discussions he got on life were from his teachers (hurray for teachers!), while the standard comments from his close circles were on as how much trouble he was. For instance, on his return after a stint of studying in the UK, he was welcomed with the statement “I can’t say anyone missed you.”

Recovery from alcoholism therefore meant two things for Lyimo: learning to deal with the cycles of life, aka growing up, and being surrounded by a community to help him on the journey. Lyimo just had to learn to stand strong through the ups and downs of life, as he explains in one of my favorite passages in the book: “I had to take risks… I had to invite rejection. As [painful] as it was, I had to believe that … it was an opportunity for growth. I think I’ve been through more rejection in recovery than in active alcoholism. Well, it is true because I have been fully present in those phases. I had no booze to run to.”

Incidentally, that’s what initiation is supposed to do. The idea of pain is to not to prove that one is a man by not crying; it is to teach African children that adulthood is being able to be “fully present” in both the good and the bad moments of life. It is because this complex philosophy/psychology has not been fully explained that many Kenyan men celebrate facing the knife without tears, only to later fail to step up when their families and their nation need upright men who stand up for justice, who serve society with love and dedication, and who reject moral corruption and economic exploitation. But men cannot achieve that alone. They need to be in a community like the one that Lyimo eventually found: a community that affirms people, that sets aside time to listen and teach, that loves, accepts and forgives. It must be a society that teaches people that they always need others. Lyimo puts it better: “there can never be too much help if we authentically ask for it.”

I loved Lyimo’s book. Initially I felt that the descriptions of his decadent life as alcoholic were lengthy, but I think the final pages redeemed them. I’m still disturbed about how much his home and social environment played a part in his alcoholism, because I feel that there are some lessons that his family also needed to learn, yet all the apologies seem to come from Lyimo alone. Then there are the occasional editing faults that reminds one of the recent complaint about the torture Kenyan book reviewers are put through. However, the book is written with the tone, language and imagery usually associated with fiction or poetry. Kudos go to Storymoja for expanding the scope of creative writing to publishing of life stories and proving what Anthony Gitonga said at one of the sessions of Creatives Academy – creative writing applies to more than just fiction.

It will come as no surprise to those who know my political views that I am haunted by a statement that I suspect was not meant to be as significant as I think it is. According to Lyimo, his mother tried to keep up with the Joneses, to “emulate the settlers’ wives” by sending her children to private schools and schools overseas, and that meant keeping her kids with a constant supply of pocket money. That statement reminds me of the argument I often make, without getting much sympathy, which is that the fundamental problem facing Kenya is the settler logic inherited from the colonial times. That logic has permeated not just our politics, but also how we raise our children, fall in love and relate with one another, the career choices we make, and how we define education, masculinity and femininity, money and success. If you want to understand what that means in practical terms, you must read this book.

And I also hope the reader of this book ignores the blurbs and sees this book as more than about an alcoholic, with lessons for more than just those suffering from addiction. My side of the street is for all of us who share this street that we call life. It is a mirror held up to Kenya to examine our definition of life, success, love, sex, faith, parenthood, masculinity and femininity. It is also about being human and finding redemption. But most of all, it is about our need to be deliberate about everything we do, or to use Lyimo’s words, to be “fully present” in every aspect of our own lives and of each others’ lives.

Thriving in The Love Edition View all posts by Chris

This site uses Akismet to reduce spam. Learn how your comment data is processed.